According to the ex-Electricity Director of the Ministry of Energy, Victor Poleo Uzcátegui, a preliminary estimate indicates that $50 billion was put into the Electrical Sector between the years 1999-2009, but scarcely 30% was spent on power generation and transmission projects.

«The country does not depend on Guri alone and what is happening is that a vile story is being spread from the presidency which attributes the current crisis to the Caroní hydroelectric complex,» engineer and ex-Electricity Director Víctor Poleo Uzcátegui stated in an exclusive interview with Zeta.

Poleo finds himself very busy and much in demand these days, as the foreign press turns to him to know and understand what is happening with electricity in Venezuela, paradoxically, now called «energy power.»

As a preface to the interview the expert began to talk of the Lower Caroní, a system of cascading water hydroelectric dams:

–Guri is a regulated reservoir, the water passed through turbines in Guri is afterwards passed along to the lower dams in the following order: Tocoma, Caruachi, and Macagua.

-The water of the Guri reservoir is from unsteady-state influx, i.e. the contributions to the Caroní Basin fluctuate historically between 6,500 and 3,500 cubic meters per second, according to records from 1950 to the present.

He pointed out that thermal power generation is from fixed-state influx, i.e. plant machinery such as at Planta Centro or Tacoa or Arrecifes can be activated in a short time.

“The art of mixing water power generation with thermal power generation is the art of optimizing the usage time of the Guri reservoir.  On the one hand, one does not want to reduce the amount of water stored in Guri to too low a level because there will be barrels of combustible fuels lost to make up the shortfall. On the other hand, one does not unnecessarily «burn» barrels of thermoelectric combustibles” (if there is water in the reservoir) Poleo made clear. 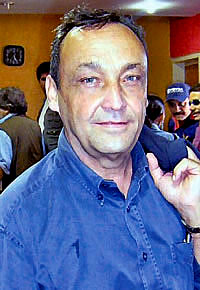 -There then exists –he continues– an optimum mix of the hydro-thermal electric power system. To master and administrate such a formidable and complex task mathematical models are used, a kind of laboratory in which they simulate reservoir water levels over time compared against national electric power demand and then they «dispatch» the generation of hydro or thermal electric power in real time but placed within a future horizon.

-This task rests within the hands of the National Management Center (CNG), formerly OPSIS, which uses two types of «dispatch.» One in real time (hours, days) which is operational dispatch.  Another is in medium and long term planning, over 5 to 10 years.

-In Venezuela –the expert continued– mathematical models exist for load dispatch.  One of them is PLHITER (Spanish acronym for Hydro-Thermal Planning), developed by a team of Venezuelan engineers and mathematicians, in use since the mid-80’s by EDELCA, CADAFE, and CNG (formerly OPSIS).

He obligingly clarified that PLHITER is therefore an instrument of planning.

Those responsible for the electrical power crisis

Poleo considers that «the deprofessionalization of the Electrical Sector since 2003 has become an infringement upon the planning of the Venezuelan electrical sector, also a consequence of the «anti-planning» of the nation, a task which rests in the Ministry of Planning, but a task they have taken up irresponsibly, like the President of the Republic in his Sunday outbursts».

-The electrical sector–he stresses–doubles its investment every 15 years, as a function of demographic growth and industrial activity.  Medium and long term plans existed in 2000, but the projects were not implemented thanks to embezzlement, waste and corruption.

-It is our ongoing estimate that during the period 1999-2009 money appropriated to the Electrical Sector can be placed on the order of at least $50 billion (U.S.), according to the following: 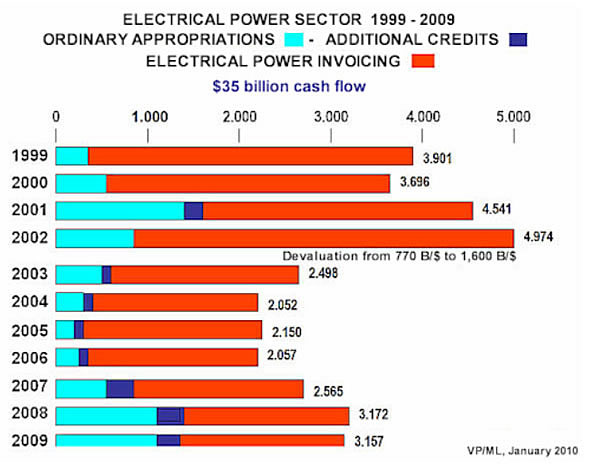 -To judge by the thermoelectric power station’s current shortages and based upon a sampling of CADAFE projects, it is our conjecture that scarcely 30% of the power generation and transmission projects were carried out.

– Hence the current electrical crisis, already predicted as of 2000, a consequence of not making the investments in thermoelectric power centers–the specialist assured us.

“Those responsible for the crisis: Jorge Giordani in the Planning Office, Rafael Ramirez in PDVSA-Energy and, responsible for selecting them, Hugo Chavez,» Poleo stated.

Giordani, in particular, broke the golden rule of strategic planning when he blocked our future options by rejecting hydroelectric power development in the Upper Caroní as far in to the future as 2030.

«The electrical power crisis is a political crisis»

-What is the relationship between Guri’s water level and electric power savings?

-The electrical power «savings» over these two weeks signifies a diminution of 7% of the usable volume, so the trend is predictable.

-Without having the hydro-thermal electric power system, the room to maneuver in the thermoelectric power plants that was announced a thousand times since 2000 and never implemented means that the Guri reservoir will be exhausted in the short term.

-Then from there we will be obliged to ration to look after the value of the water in Guri, which will not be «savings» in the strict sense, only a sub-optimal administration of the Guri reservoir in the presence of thermoelectric deficiencies.

-The government says that the electrical power crisis is generated by the low level of the Guri reservoir.  What is your opinion with respect to this statement?

-Does the rationing of electrical power contribute to resolving the problem?

-It does not «resolve» the current crisis, it only prolongs it, diluting the agony until 2012, in the hope of bringing the thermoelectric power centers online, which are still insufficient in their capacity and scheduled dates to do the job.

–«They should» do as indicated, i.e. maintenance and replacement, for which we require engineering and trade, affairs with which these by the book military men are unacquainted.

-What is happening with the savings in electricity?

-They are cubic meters of water saved for a better time.

-Does the entire country depend on Guri?  Is the situation of this reservoir really that dramatic? 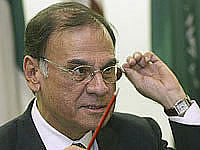 -The country depends upon a vulgar political class that is intellectually impoverished, irresponsible, and criminal. The country does not depend on Guri —Poleo made clear– and a vile story is being spread around as a message from the presidency that attributes the current crisis to the Caroní hydroelectric complex, «all the eggs are in the same basket,» in as much as the Venezuela of the second half of the 20th century rested deservedly upon abundant, clean, cheap, and renewable energy.

-If we did not have the Caroní, today we would be burning the equivalent energy of 570 thousand barrels in gas, diesel and fuel oil. It is a volume we have been left to export.  The Caroní adds rent to the petroleum rent.

-CORPOELEC warns that if the water level at Guri continues to fall, in 120 days the production of electricity in the country could collapse.  Is this right?

-A problem poorly identified is a problem poorly resolved. There is disinformation from CORPOELEC and, predictably, the warnings from the EDELCA professionals hold true.

–CORPOELEC blundered when it announced pointless rationing in Caracas, a «savings» of 200 MW facing a daily shortfall of 2,000 MW, a deficit that does not include another 2,000 MW which, in theory, they would have to assign using a backup plan that eventually will revolve around rationing power for the use of excess machinery.

-What is your prediction for the electrical power situation in the country? What should we expect and what should be done?

-The electrical power crisis is a political crisis, it does harm to the welfare of society and national economic activity.  Shutting down the industries of Guayana City disables its construction materials industry (beams, metal rods, shuttering mesh, fence wire, etc.); the metalworking manufacturing industry (aluminum door and window frames, packaging products, etc.) and in the oil and gas industry (tubing and pipes). A nation without economic activity, a dead Guayana City.

-The solution to the electrical power crisis is political, nothing other than a political change.  Urge Chavez to resign and bring about a wise transition into the hands of a sane society that rejects the past and the present, Poleo Uzcátegui recommends.