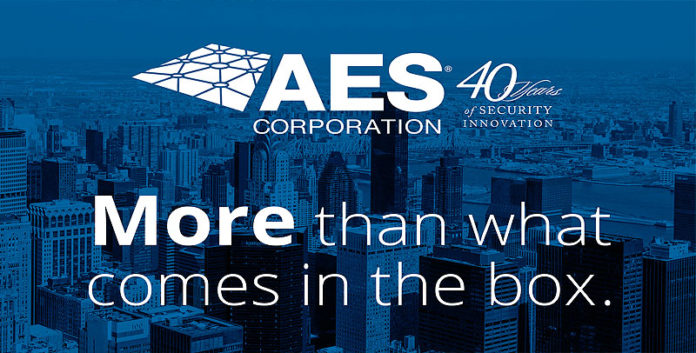 The Agreement provides that PDVSA will acquire Sellers’ EDC shares in a tender offer.  Subject to the terms and conditions in the Agreement, including the completion of certain due diligence

(Exact name of registrant as specified in its charter)

Check the appropriate box below if the Form 8-K filing is intended to simultaneously satisfy the filing obligation of the registrant under any of the following provisions (see General Instruction A.2.):

On February 22, 2007, The AES Corporation and its wholly-owned subsidiary, AES Shannon Holdings BV (together, “Sellers”), entered into a definitive agreement (the “Agreement”) with Petróleos de Venezuela, S.A, (“PDVSA”), pursuant to which Sellers have agreed to sell to PDVSA all of Sellers’ shares of C.A. La Electricidad de Caracas (“EDC”). The agreement is dated as of February 15, 2007. The original Agreement is in Spanish.  A convenience translation into English is filed as Exhibit 99.1 and is incorporated herein by reference to this Form 8-K.

Subject to the terms and conditions in the Agreement, PDVSA has agreed to pay Sellers a purchase price of US$739,260,000 at the closing, net of any withholding taxes. In addition, EDC has the right to pay a dividend of up to approximately US$120,000,000 to its shareholders prior to closing. Sellers, as owners of 82.14% of the outstanding shares of EDC, would receive up to US$98,568,000 in the dividend, following its conversion from Bolivares into U.S. Dollars, which is expected to occur within 90 days of the dividend payment date.

The Agreement provides that PDVSA will acquire Sellers’ EDC shares in a tender offer.  Subject to the terms and conditions in the Agreement, including the completion of certain due diligence, PDVSA will commence and publicly announce the commencement of concurrent tender offers in Venezuela, the United States and Spain (the “Offers”), within 30 days of the date of the Agreement, at a price per share not less than the price per share implied by the purchase price for the EDC shares owned by Sellers. The closing of the Offers will occur no later than: (i) the expiration of the longest of the minimum periods for which the Offers are required by any applicable law to remain open, which AES believes is approximately 20 business days or (ii) the satisfaction of all conditions precedent in the transaction, which include receipt of necessary government approvals.

AES purchased a controlling interest in EDC in 2000. EDC is the largest private electric utility in Venezuela. It is a provider of power and light to approximately one million customers in the Caracas metropolitan area. EDC also owns and operates five generation plants with a total of 2,616 MW of generation capacity. These facilities collectively represent approximately 14% of the electricity consumed in Venezuela.

In connection with entry into the Agreement described in Section 8.01 above, on February 22 , 2007, management concluded that a material impairment of Sellers’ investment in EDC has occurred, which will be recorded in the first quarter ending March 31, 2007. This material impairment represents the net realizable value of Sellers’ investment in EDC defined as the current estimated net book value at December 31, 2006 less the estimated purchase price. Management estimates that this pre-tax, non-cash charge will be in the range of $550 to $650 million.  The impairment charge will not result in any future cash expenditures other than the payment of applicable taxes associated with the transaction.

Pursuant to the requirements of the Securities Exchange Act of 1934, the Registrant has duly caused this report to be signed on its behalf by the undersigned hereunto duly authorized.

2. Within a period of thirty (30) days following the date of this Agreement, PDVSA shall begin and announce publicly, public offers running in the Republic, pursuant to the stipulations of article 4 of the Norms on Public Offers of Acquisition, of Exchange and Take Over of Companies that Make Public Offers for Shares and Other Rights over Them announced by the National Stock Commission (“Venezuelan Offer”), and in Spain (“Spanish Offer”) and in the United States of America (“U.S. Offer”), and together with the Venezuelan Offer and the Spanish Offer, the “Offers”) in accordance with the laws of the stock markets of such countries, in order to acquire every and each one of the shares for the capital stock of EDC, at a price per share that is not below the implicit price per share in the total amount mentioned in clause 1 (or its equivalent in Bolivars in the case of the Venezuelan Offer or in Euros in the case of the Spanish Offer). PDVSA, or the entity appointed by it, shall perform the Close of Offers (“Closure”) once the following takes place: (i) that the longest minimum period has expired during which it is necessary for some of the Offers to remain open, by virtue of any applicable law; and (ii) that the conditions described in clause three of this Agreement have been met.

3. The Offers shall be subject to the following conditions:

a. That, within a period of thirty (30) days following the date of this Agreement, PDVSA does not find, in relation to EDC and during the course of its legal and financial audit (due diligence), events or circumstances that: (A) reflect that the public information presented by EDC before the National Stock Commission of Venezuela (the “CNV”), or any other authority in the Republic, in Spain or in the United States of America, is deceitful in any significant event; or (B) insofar as said event or circumstance is produced after the most recent presentation of said public information, in a reasonably possible manner, it may have a significant adverse effect on businesses, operations, financial condition or results of the operations of EDC. It is understood that the announcement of this Agreement or any declaration by an official Venezuelan organization shall not imply the non-compliance with this condition whatsoever;

b.That the signing of this Agreement, the performance of the Offers or the completion of the operations envisaged in it, shall not imply the non-compliance, expiration or reduction of rightsor the anticipated enforceability for the payment of obligations, pursuant to any contract or agreement in which EDC or any of its subsidiaries is a party to or by means of which EDC or any of its subsidiaries is bound, or that may cause the application of stipulations related to changes of control under any of said contracts or agreements that, whether individually or jointly, may have a significant adverse effect on businesses, financial condition or result of the operations of EDC, or that may activate the right of an employee, official or director of EDC to receive relevant payments deriving from the termination of their relation with EDC. The aforementioned applies in all cases except for matters previously notified in writing to PDVSA; and

c. That the procedures and all the authorizations, approvals or administrative acts that may be required from the government authorities for the improvement of the Offers have been carried out and obtained.

4. The Vendors hereby declare and guarantee to PDVSA that, unless notified in writing by the Vendors or EDC to PDVSA before Closure: (i) all the forms and public reports presented or submitted by EDC during the last three (3) years to the government authorities in the Republic, in Spain and in the United States of America (jointly, “EDC reports”) are true in all relevant aspects and they do not omit any events that must be mentioned or that are necessary to be mentioned in order for the claims contained therein not to be deceitful in the light of the circumstances under which they were performed and; (ii) the financial statements of EDC included in EDC reports reasonably present the financial situation of EDC and its subsidiaries in all substantial aspects, as well as its operations and effective cash flow to the date of their issuance and the results of their operations during the period covered by them. These declarations and guarantees shall survive the effects of Closure and they shall remain valid for a period of four (4) months fromthe moment of Closure. During the period running from the date of this Agreement and Closure, the Vendors shall ensure that EDC develops its operations in the same manner as they were being developed before the signature of this Agreement. Likewise, it shall be ensured that no operations are performed aside from their ordinary course of business. It is understood that before Closure, EDC shall be able to declare and pay the regular yearly dividend, payable to all shareholders (including the Vendors) for the total amount of up to ONE HUNDRED AND TWENTY MILLION AMERICAN DOLLARS (US$120,000,000), in the understanding that the Republic shall instruct CADIVI to authorize the conversion into dollars of the dividend for the holders of the ADSs (including the Vendors), within ninety (90) days after their payment, if the corresponding application was made.

5. It is agreed that before Closure: (i) the Vendors and their subsidiaries and affiliates shall maintain their business relations with EDC as they were maintained before, including the compliance with any contract for the provision of goods or services to EDC and their subsidiaries and, (ii) neither EDC or any of its subsidiaries or affiliates shall modify or render said contracts terminated without prior consent from PDVSA, nor shall they vote as shareholder of EDC to approve acts or operations of EDC or its subsidiaries, aside from the ordinary course of its business.

7. After Closure and, upon the request of PDVSA, the Vendors undertake to maintain the provisions of third parties regarding intellectual property, computer programs (software) or other services, for a period that is long enough for EDC to continue its operations as they were being performed before this agreement. The period indicated shall not be longer than twelve (12) months. The services shall be provided under the terms usually granted to EDC during the period of the three (3) years before the date of this Agreement, subject to the regular and prompt payment of said services by EDC.

8. After Closure, and for a period of two (2) years, the Vendors shall maintain all the information owned by EDC and its subsidiaries under confidentiality.The parties sign this Agreement, in the city of Caracas, on the 15th day of February 2007.

The parties sign this Agreement, in the city of Caracas, on the 15th day of February 2007.