If this site has been able to gather enough evidence to prove, beyond reasonable doubt, the corrupt nature of this $4.5 billion graft operation, how come Villlalobos and Ramirez still walk free?

In September 2013, this site wrote «…PDVSA assigned dollars to a foreign corporation and people wanting to offload Bolivares and get dollars were offered the scheme. It is alleged that a Panama-vehicle controlled by Oberto Jr (purportedly Violet Advisors) was assigned dollars, which were then paid into Violet’s account at Compagnie Bancaire Helvetique (CBH), in turn used by Danilo Diazgranados and Charles Henry de Beaumont; Victor Vargas (owner of CORP Banca and Banco Occidental de Descuento or BOD) is alleged to have bought into the deal, paying his due in a Banco Industrial de Venezuela bank account belonging to a company called Atlantic…».

Since then, Atlantic’s $4.5 billion money laundering scheme with PDVSA has been unraveling in different places. We kept hearing that Nervis Villalobos was a key figure. The workflow was believed to have been: Luis and Ignacio Oberto came up with the plan but did not have access to Rafael Ramirez; they called on their good friend Francisco D’Agostino, who in turn got his mate / partner Alejandro Betancourt involved; Betancourt had kept the counsel of Villalobos -from previous power plant procurement deals with Derwick Associates– and asked him to present Obertos‘ scheme to Ramirez, which resulted in Ramirez granting $4.5 billion to Atlantic, the shell created for the purpose. From there it was plain sailing.

But it was hearsay, and there was little in the way of solid evidence. No more. In any crime, it is never what people talk about, but what can be proven in a court of law. In this, $4.5 billion money laundering case, this site has the entire chain of evidence, since inception to what ultimately represents conclusion: payment of bribes to those who got the deal going.

We have the contract between Nervis Villalobos and Derwick Associates, dated 14 January 2010, whereby Villalobos undertakes to represent Derwick and chase deals for it with Venezuelan institutions.

We have the contract between Nervis Villalobos and Atlantic (Juan Andres Wallis Brandt signing), dated 8 January 2012, whereby Villalobos undertakes to represent Atlantic in negotiations regarding a «debt plan with a State entity of first order» (read PDVSA), while Atlantic commits to pay Villalobos 4% total amount of loan agreement with PDVSA.

We have the proposal letter that Juan Andres Wallis Brandt (Obertos‘ proxy) sent to Rafael Ramirez on behalf of Atlantic, dated 29 February 2012.

We have a letter signed by Ramirez, also dated 6 March 2012, pitching and justifying the deal to board members, and designating Victor Aular as person in charge for all issues pertaining contract with Atlantic.

We have the signed contract, between Atlantic (Wallis Brandt) and PDVSA (Aular), dated 12 March 2012.

We have Atlantic’s (Wallis) cession of «…totality of rights and obligations…» pertaining the contract between Atlantic and PDVSA to Violet Advisors, a shell controlled by the Obertos, dated 15 March 2012. For compliance reasons, arrangement between PDVSA and Violet would change to benefit Welka Holdings Limited (UBOs Obertos) in 2013. We have the document whereby Violet cedes all rights and obligations to Welka.

We have communication sent from Violet to PDVSA, with instructions of where payments as per contract should be made (EFG Bank and Compagnie Bancaire Helvetique), dated 16 March 2012.

We have internal compliance documents, from EFG Bank, onboarding the Obertos (Violet) as well as justification for the money laundering scheme, from February 2012.

We have a legal opinion, produced by Tamara Adrian, trying to justify the deal according to Venezuelan legislation for compliance purposes, dated 9 February 2012.

We have evidence of bribe payments made into different shells ultimately controlled by Betancourt (Minenven, Delphi, Julotti, Zoletto, Imminvest, IPC Investments, Vecon, and Sinfin). These got around $70 million from Violet into accounts held in Bank Frey, Compagnie Bancaire Helvetique, HSBC, and Julius Baer, between March-April 2012.

We have registry documents from Barbados, showing that Betancourt, Francisco Convit and Pedro Trebbau are Minenven‘s company directors.

We have Compagnie Bancaire Helvetique‘s documents that link Betancourt & co, the Obertos, and Danilo Diazgranados to the scheme.

We have EFG Bank‘s documents that link Betancourt & co, and the Obertos, to the scheme.

We have evidence from EFG Bank linking the Obertos to Pedro Binnagia, charged in another $1.2 billion money laundering case, which also involved Francisco Convit (partner of Betancourt).

We have a letter, dated 15 May 2012, whereby Violet undertakes to honour 4% commission agreed in contract between Villalobos and Atlantic, and commits to make a «series of payments» starting in May 2012, into Vamshore Enterprises Ltd‘s (shell controlled by Villalobos) account number 0006 0008 2712 0054 6984 at Banca Privada d’Andorra, for services rendered by Villalobos to Atlantic in getting PDVSA to approve money laudering deal.

We have evidence, from Banca Privada d’Andorra, that shows payments made (11 July / 14 September 2012) into Vamshore‘s account (as described) for €55,620,453.73 that originated from Violet‘s account at Compagnie Bancaire Helvetique.

We have evidence of a communication, dated 4 October 2012, sent from INTERPOL Andorra to INTERPOL‘s offices in Caracas, Quito, Washington, Madrid, Paris and Bern, requesting information about Villalobos and others. That is, law enforcement in, at least, Andorra, Spain, France, Switzerland, U.S., Ecuador and Venezuela have been aware of Villalobos‘ criminal activities since October 2012.

If this site has been able to gather enough evidence to prove, beyond reasonable doubt, the corrupt nature of this $4.5 billion graft operation, how come Villlalobos and Ramirez still walk free? None of this could have happened without Ramirez. How come he has not been indicted? How come the Obertos were allowed to flee U.S. soil recently?

Today, we got terrible news: Florida star prosecutor Michael Nadler, the man who’s done more than anyone to bring these thugs to justice, is leaving. There’s no guarantee whatsoever that his replacement will prosecute Venezuela-related cases with similar zeal. Will these criminals get away with it? 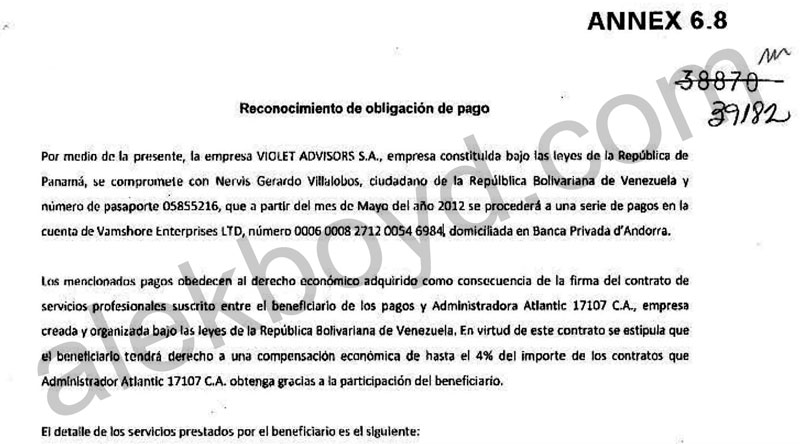